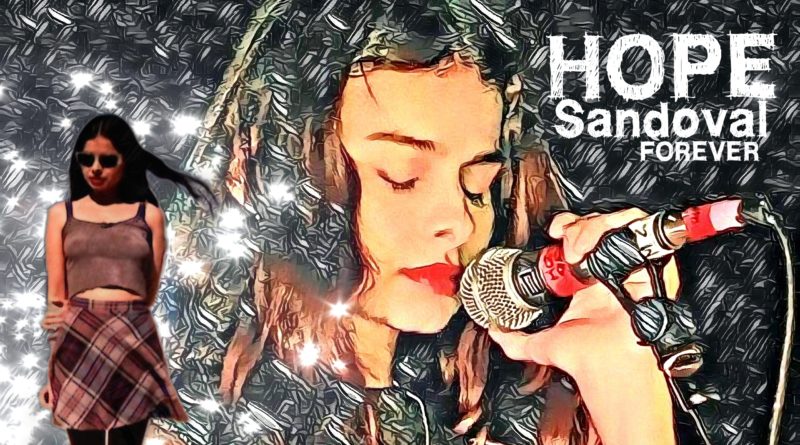 I was reviewing Mazzy Star back in 1996 for the Boston Globe and I wrote this: “Mazzy Star has its sublime charms. They’re a wind-down sort of band, a bed-time sort of band. There’s a droning, loping quality to it. Fans of the soft side of the Velvets are Mazzy fans. It’s a moth to the flame sort of thing, gentle hypnosis. David Roback plays guitar; Hope Sandoval plays a statue.”

To say she’s reserved would be an understatement.

I wasn’t really trying to be flip, or not especially so. Oasis’s singer Liam Gallagher had perfected that move (or more accurately non-move) as well. Pretty sure I used that “statue” description when reviewing Oasis in a club two years earlier. The difference, perhaps: Gallagher seemed diffident and arrogant, and Sandoval seemed distant, but oddly welcoming.

“Yeah, I don’t feel that comfortable on stage,” Sandoval told me when we spoke four years ago and I asked about her stage presence. “It’s a really strange thing to be doing, to go on stage and all of a sudden have bright lights and spotlights. That would be really bizarre.”

Sandoval said she used to get blowback from certain audiences and critics for her stage presence (or lack thereof) in the ‘90s. “All the time,” she said. “I think now people are just fine with not seeing the band really. They enjoy the visuals. Basically, [on a scrim behind us] we’re using really old photographs that we’ve collected over the years, mostly from the 1900s, old family portraits.”

Sandoval – who celebrates her 55th birthday June 24 – was then on tour with her latest band, Hope Sandoval and the Warm Inventions.  When she got to my city, Boston, she sang in near-darkness, with dim back lighting. As always.

Now, Mazzy Star wasn’t exactly a done deal; originally, they were major players in the ethereal rock game from 1988 to 1997 and then re-formed in 2012. But Roback – a key player of the L.A. Paisley Underground, having led Rain Parade and Opal – died Feb. 24 of last year. Fucking cancer. Sandoval told me then they had plans on going into the studio, to record and in 2018 released the EP, Still. (Same year, Sandoval sang on Mercury Rev’s version of Bobbi Gentry’s “Big Boss Man.”)

VIDEO: Mazzy Star “Fade Into You”

Mazzy Star leaves us with a lot of lovely music, very much including their best-known song, “Fade Into You,” one of the softest, saddest and most gorgeous songs in the dream pop canon.

But when we talked Mazzy was on the shelf and the Warm Inventions were, uh, warming up. Sandoval and her partner/drummer-songwriter Colm O’Ciosoig will never forget the opening of that 2017 tour. The band, a quintet, kicked their US tour in Sonoma, California at the Gundlach Bundschu Winery’s Old Redwood Barn. The gig went fine.

The band got on their bus and headed towards Portland, Oregon. As they were in wine country, they went down some small roads. They had heard there was a fire nearby and they saw some fires on a ridge, but couldn’t judge how far away. But they turned a certain corner and the fires were right there, the bus driver going pretty much directly into the fires. It was the fiery equivalent of a hurricane.

They reversed direction, the tour bus and the trailer wobbling and the fire chasing them. Terrified, the band was getting ready to dump the bus and run for their lives.

“It was horrifying, what was going on,” Sandoval said, during a joint interview with her partner. She lives in Berkeley. “Those are our neighbors. It’s heartbreaking, all of these people. The Winery we played survived it, thank God, but a lot of people lost their homes.”

They made it to the Portland gig two nights later, Sandoval was still so shaken she left the stage after six songs. She and the band returned after nearly an hour to finish the set.

Sandoval and O’Ciosoig have never been a romantic couple, but have lived together and been an off-and-on musical couple going back to 2000. The following year they made their album debut with Bavarian Fruit Bread. I first talked with them on the verge of their first Boston gig in 2002. The two were introduced by mutual friend Kevin Shields, guitarist for O’Ciosoig’s other band, My Bloody Valentine.

“I met Colm,” she told me then, “and Colm and I started to spend a lot of time together. I had a portable studio I was traveling with. We started to write together and that’s what happened. The songs just evolved into what they are.”

Sandoval stressed music’s potential to transport the listener. “I think music is like little films, and it’s nice to listen to music and really escape.”

There is still that, of course, though Hope Sandoval and the Warm Inventions output has been minimal. After the disc, there was the Through the Devil Softly album in 2009, the Until the Hunter album last year and in 2017 a three-song EP called Son of a Lady. (Nothing since.)

Why the long time between recordings?

Sandoval: “We’ve always worked together [but] we also have other projects and we take breaks.” (O’Ciosoig has been in and out of My Bloody Valentine over the years. He’s in now (or last we knew). MBV notched one of the most stunning sophomore albums in rock with Loveless in 1991, featuring blistering but beautiful white-noise rock.

Both stressed the Warm Inventions is, right now, “pretty high up there” in terms of priorities. The Warm Inventions don’t have the country tinge of Mazzy Star, but there are similarities: An emphasis on sound that envelops a listener, one that moves slowly and demands patience. There are Sandoval’s sultry, almost detached vocals, pitched between melancholia and sweetness and an aura of mystery. Sandoval sings in a whispery, alluring voice – she’s the siren on the rocks.

My take has been that The Warm Inventions are, by and large, like Mazzy Star, a quiet band, but it’s a thought Sandoval quickly counters: “I don’t think either band is quiet; I think both are quite loud” though she allows, “There are some quiet songs, definitely. The bands aren’t, like, heavy, heavy loud bands. And [we have] a quiet audience, obviously, so when you play a quiet song it’s nice to have quietness in the audience.”

Warm Inventions’ songwriting is collaborative, but the lyrics are all Hope. “We’re quite complementary,” Sandoval said, adding there’s little conflict and little pre-planning when they go in the studio. “Especially when we’ve been working again with the guys from [the Irish band] Dirt Blue Gene. We don’t tell them what to do and some of the songs are written with them.”

Three members of Dirt Blue Gene – guitarist Dave Brennan, we have a keyboardist Mick Whelan and bassist Al Browne – flesh out the band on stage, as well. The aim is to create something that, while melancholic, comforts and envelops an audience.

O’Ciosoig called it “simple, sweet music that is very comforting. It’s important to have music that’s comforting during times of stress.”

This past January Miley Cyrus recorded “Fade Into You” for NPR’s Tiny Desk Concert series.

So, it had been a few years since we talked so I reached out via email. (Imagine that! An artist speaking to the press when she doesn’t have product to sell!)

Quick one: What’s your take on Miley’s cover of “Fade Into You”?

I’m happy about it. She’s got a lot of good energy, and if one of our songs sparked some of that positive energy, it just makes the song stronger and turns it into a bolt of lightning that’s gonna electrify everybody forever!

The most obvious place to start, of course, is what has the pandemic meant or done to you in terms of your music? Did it affect touring or recording plans? What does the future look like for Hope Sandoval and the Warm Inventions?

Colm and myself haven’t really talked about what our next plans are as we are both working on other projects, but I do look forward to doing some more music with those guys. They are all such amazing musicians. I feel so lucky to know them and have created such great songs and sounds with them.

Just before the pandemic hit, we suffered the loss of David and it was a massive blow. So everything shut down for me at that moment, and then when the world shut down, it was like now let’s add fear and loneliness to the grieving. What a nightmare it’s been for everyone.

And, perhaps, on a deeper level, did going through this – as we all have, still are to a degree – have a psychological effect? Was it harder to, as Richard Thompson once sang, “want to see the bright lights tonight”?

Oh, that Richard Thompson, what a lucky man! He married the most beautiful woman in Santa Monica…

It has been more like Linda and Richard Thompson’s [line] “Walking on a wire and I’m falling.” I just kept thinking how much worse can it get?

When we talked in 2017, one of the things Colm said that struck me was you guys played “simple, sweet music that is very comforting. It’s important to have music that’s comforting during times of stress.” This of course was way pre-pandemic, but maybe that’s even more true now. Thoughts?

Yes, I think for a lot of people music was like a warm security blanket; it gave a sense of comfort and happiness. Music indulges you in every emotion whether it be sadness, happiness, anger, jealousy. It’s like an intangible acupuncture; you play it and it starts to make you feel better, and you don’t know why, but it works… it just does.

Our previous interview was before David’s death and you’d talked about recording, later releasing the Still EP. I just wanted to ask what your thoughts were, professionally and personally, about the time spent with him, what he and his writing meant to you and your music. And if you wish, what he meant to you personally?

I met David when I was a teenager so we’ve known each other for a very long time. We were both born and raised in LA [and] even though we came from different sides of the tracks, we got together and it fueled a creative devotion that stayed with us throughout the years.

We’ve always had these different chapters in our lives and we were experiencing them, sometimes together and sometimes apart. People would come and go, but we were always a constant for each other. In a strange way we created a family and it was us and our music, and no matter what was happening we always would come back to it, because it was what we recognized and what we thought of as home. I miss him so.

As this piece is timed to your birthday – happy 55 – I want to ask about what you feel you’ve gained or lost as time has marched on?

I’ve suffered a lot of losses and it’s been really difficult … I want to be more like that little green lizard that loses its tail, then something beautiful happens and her tail grows back and everything is balanced again.