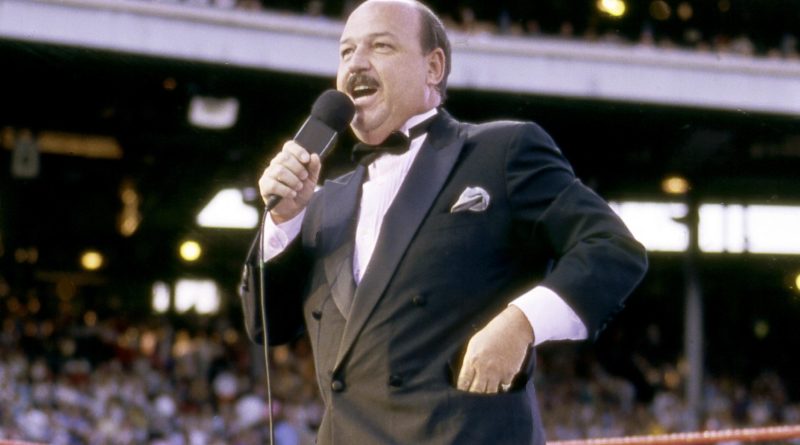 Whether you came of age with Nick Bockwinkel in the 1970s, Hulk Hogan in the ‘80s, or the NWO in the ‘90s, the late “Mean” Gene Okerlund helped narrate your childhood.

His engaging baritone voice and talent as a broadcaster suited professional wrestling’s three-ring circus from its days as a local attraction to the groundwork of WWE’s continued global dominance.

Some of the best memories of Okerlund come from the WWE’s mid-‘80s “Rock ‘n’ Wrestling Connection.” That’s when Hogan, Okerlund, and the rest of WWE owner Vince McMahon’s crew rubbed shoulders with Cyndi Lauper, sometimes appeared on MTV, and earned enough cultural cache to translate from grandma’s rasslin’ show to the toy aisle and CBS’ Saturday morning cartoon lineup.

Just as the Hulkster played bass in bars around Florida before trying his hand at wrestling, Okerlund’s commanding voice suited rock music long before WWE milked its pop culture ties with 1985’s The Wrestling Album. As a young man in South Dakota, Okerlund performed in multiple groups as a vocalist and multi-instrumentalist.

In the 1950s, Okerlund played trumpet in the Sisseton, SD-based Harold Johnson Orchestra. Little is known about the group, described by the South Dakota Rock and Roll Music Association as performing old time, country-Western, and “modern” music. Okerlund and bandmates Gaylen Johnson and Bob Syverson left the orchestra to form rock outfit Gene Carroll and The Shades.

Named for its members’ affinity for sunglasses, the group’s swinging instrumentals and rockabilly stompers got recorded for posterity in the late ‘50s and early ‘60s for a pair of 45 rpm singles. The early rock archivists at Norton Records issued three songs from the band’s limited output in 2000: “Red Devil,” “Do You Remember,” and “Is it Ever Gonna Happen.”

“Do You Remember” is among the cuts sung by Okerlund. Despite it being a good song, the obvious presence of Mean Gene’s voice can be a little distracting. It’s like how The Gentrys of “Keep on Dancing” fame cut a few accidental novelty songs, including the earliest release of Neil Young’s “Cinnamon Girl,” with Okerlund’s future WWE and WCW co-worker Jimmy Hart handling lead vocals.

Long after Okerlund transitioned from being called Gene Carroll by bandmates to getting misidentified as “Gene Mean” by the Iron Sheik, WWE offered a more visible shot at musical exposure. On the before-mentioned Wrestling Album, Okerlund cut a straightforward and light-hearted version of Little Richard’s “Tutti Frutti.” The March 1, 1986 debut of the WWE’s Slammy Awards was broadcast on MTV and featured a memorable live performance of Okerlund’s contribution to the album.

Two years later, the WWE built on the success of early WrestleManias with Piledriver: The Wrestling Album II. This time, Okerlund teams with co-producer Rick Derringer on a redux of “Rock and Roll, Hoochie Coo.” There’s a charmingly campy music video, complete with an uptight teacher who was so obviously going to let her hair down sometime after Okerlund unveiled his glitter wig.

As WWE’s relationships with MTV and Lauper faded, so did Okerlund’s second shot at a recording career. Still, McMahon’s vision for turning wrestling personalities into pop culture icons briefly offered a listen at one of his stars’ hidden talents as an early rock vocalist.