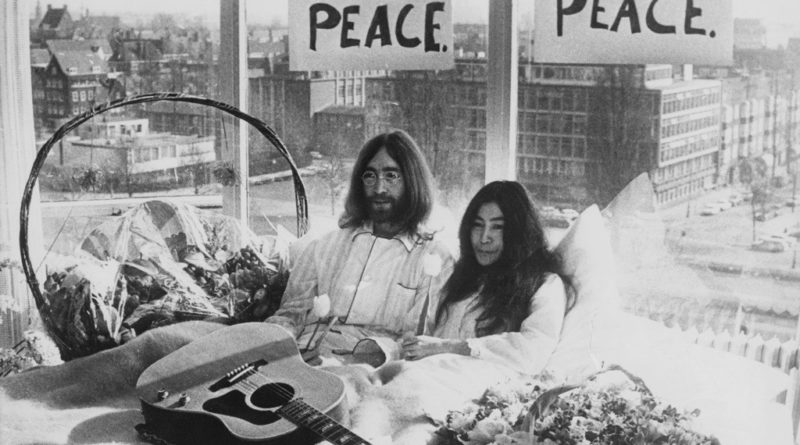 As the Beatles launched their punningly-named Apple Corps in 1967, the group also started a number of offshoot or subsidiary business lines. Apple Records would be the most well-known (and truly the only successful) of those, but there was, for a time, Apple Films (Magical Mystery Tour, Let it Be), Apple Publishing and an experimental record label, Zapple Records.

Home to more offbeat titles, Zapple began with George Harrison’s Wonderwall Music, following it up with John and Yoko’s follow-up to their Tetragrammaton/Apple release, Unfinished Music No. 1: Two Virgins. Equally non-musical as its predecessor, Unfinished Music No. 2: Life With the Lions was an audio verité, spoken-word disc that, while intermittently interesting, couldn’t really be counted on to provide sustained listening enjoyment on repeated spins.

George’s Electronic Sound did contain music of a sort, but it too was a decidedly, er, niche release, and its finding a home on Zapple made sense. So, too, would it have followed John and Yoko’s third release within a year, Wedding Album be released on Zapple.

Alas, no. As the Beatles splintered, their interest in the various business lines quickly waned, and new business manager (of all except a wary Paul McCartney) Allen Klein shut down most of the Apple subsidiaries. At least in part for that reason, when Wedding Album appeared on record store shelves in September 1969, it bore the Apple Records label.

Designed with all of the care one might expect of a memento designed as a keepsake for wedding guests, Wedding Album remains a curio. Yes, it’s nominally a record, but the box set contains other components that, in the end, are far more interesting and revelatory than the audio etched into the two sides of the long-playing vinyl record.

Housed in an inch-thick white box, Wedding Album features stark cover art that follows on from the approach used on the previous year’s The Beatles double LP (aka the White Album). The cover image is a black-and-white photo of the wedded couple outside the Magistrate’s office on Gibraltar. The back cover of the box is blank.

The box opens to reveal its content; pasted to the inside cover of the box top is a full-color reproduction of the couple’s Entry of Marriage certificate, dated March 20, 1969. Peter Brown (memorialized in the lyrics of “The Ballad of John and Yoko” and later author of the dishy tome The Love You Make) was a witness to the ceremony; one D. Nutten was the second witness.

The box contains all manner of goodies. A facsimile of a photo booth photo strip shows four images the the happy couple’s faces. A souvenir post car (suitable for mailing if one is so inclined) features a picture of John and Yoko during their bed-in for peace. A 12” x 12” lacquered sheet captures (in black-and-white) a slice of the couple’s wedding cake place atop a doily. A two-sided 12” x 36”  poster features John’s cartoon drawings and a blurry Polaroid photo taken aboard a plane.

A booklet/poster titled “The Wedding” preserves more, better and larger photos of the ceremony. And serving as a wedding scrapbook, another booklet (this one with a heavy stock cover) entitled “The Press” saves numerous newspaper clippings about John and Yoko’s Gibraltar wedding.

The record itself is situated inside a gatefold LP sleeve; the front cover features a photo of the couple kissing, one that (in retrospect) is very reminiscent of the shots used for 1980’s Double Fantasy and the 1984 posthumous release, Milk and Honey. It’s unlikely that more than a handful of purchasers of those LPs made the connection, since the Wedding Album LP jacket wasn’t widely seen. The back cover displays a color photo from the bed-in along with what could, one supposes, consider a track list: “Amsterdam” and “John and Yoko.” The gatefold opens to a poorly-lit photo of the couple, surrounded by microphone-wielding journalists at the bed-in.

My personal copy, a 1977 Japanese reissue of Wedding Album (on Odeon Records) includes a four-page transcript – in Japanese and English – of the record’s contents; having never actually seen a British or American pressing, I can’t state for the record whether they include a version of this.

The record itself is as odd and idiosyncratic as one might expect. “Amsterdam” is an audio document of a conversation/interview that took place during the bed-in for peace. The track opens with John prompting his partner: “Okay, Yoko.” Then Yoko Ono sings unaccompanied the “Peace Call,” aka “John, John, Let’s Hope for Peace.”

What follows is about 20 minutes of interview chatter. Both John and Yoko take turns responding to a journalist’s queries, questions like, “What do you think was the biggest success in history, about 300 years?” and “What do you think about the behavior of Austrians and Germans during the Second World War? Don’t you think that they’re a little bit more responsible than others?” (To the latter, both answer, “No, not particularly.”) The session concludes with John and Yoko chanting/saying “Hair peace, bed peace.”

Side Two, “John and Yoko” is exactly that. For nearly 23 minutes, the couple takes turns saying the names “John” and “Yoko.” doing their level best to emote in different ways. Whispering, moaning, screaming, speaking in a normal tone of voice … you get the idea.

Despite its limited release, original copies of the British pressing of Wedding Album can still be found; they change hands for upward of $400. Less expensive copies exist, but those generally feature only the gatefold sleeve and record; no box, no added goodies. For whatever reason, U.S, pressings are far less expensive, in some cases going for less than $100.

Oddly enough, there have indeed been CD era reissues of Wedding Album, in Japan (1997) and the U.S. (‘97 and 2019). Secretly Canadian reissued the set on white vinyl in 2019 as well, this time in a faithful production of the original, with box and including a digital download for those who bought it to actually listen to it.

A mere two months after the release of Wedding Album – December 12, 1969 to be exact – the newly-married couple released a record of actual music, Live Peace in Toronto 1969, a document of the Plastic Ono Band’s set at that year’s Toronto Rock and Roll Revival. But that’s another story entirely… John and Yoko Strip Down The Sentiment… And Themselves