As Questlove’s hit documentary comes to HULU, the Cuban percussion giant’s performance at the 1969 Harlem Cultural Festival merits a deeper look into his extensive catalog While the celebrated Questlove directed documentary Summer of Soul is one of the most popular films of the year, I’m excited that it has brought so many formerly popular musicians to the forefront.

Though Sly & the Family Stone and Nina Simone are still inspiring young artists with their left-of-center sounds, it was cool seeing less talked about artists such as premier percussionist Mongo Santamaria featured in the film as well.

While the conga king isn’t as well-known as he should be, when he played his hit song “Watermelon Man” at the concert he connected with the audience and was electric for the cameras. “Mongo Santamaria at this festival at this time in Harlem in the ‘60s is the nexus of the Black and brown communities that make up Uptown, New York,” says Lin-Manuel Miranda, who was interviewed in the film.

The world of Afro-Cuban music would’ve had a very different sound had master conguero player Mongo Santamaria stuck with his first instrument–the violin. On his native island of Cuba, his mother chose the stringed instrument for him when Mongo was a schoolboy. While she dreamed of him joining one of the more formal Danzón orchestras, the music of his community was dominated by drums and the sound of Africa was in the air. Mongo later traded the strings for congas when he was a teenager the sound of drum was simply in his blood.

“My mother thought music meant classical music, so she tried to make me play the violin, but we didn’t get along on that,” Mongo told Drum magazine. “My thing was a rhythm thing. The violin wasn’t me.” Eventually, Mongo’s father bought him a set of drums. “I had bongos, congas, timbales. I wanted to play them all, and [instruments] weren’t cheap in those days.”

Born Ramon Santamaria in Havana on April 7, 1922 in the Jesús María barrio, a poor community in Havana, the Mongo name was one he’d inherited from his grandfather and it meant “chief of the tribe.” Asked by an interviewer at the L.A. Latin Jazz Festival in 1997, “When was the first time you hit the conga drum?” he simply looked and smiled. “When I was in my mother’s stomach,” he replied. Minutes later he declared, “The drum is life.”

Dropping out of school in the 7th grade, Mongo worked a variety of jobs including the local postman, but through it all he continued to play in local dance bands, carnivals and Yoruba-derived Santeria services. Mongo reminisced: “In the neighborhood we had all kinds of music, mostly from Africa. The music we made dealt with religion and conversation. The drum was our tool and we used it for everything.” Later, he got a gig playing at the famed Tropicana Hotel with Conjunto Matamoros and Conjunto Azul.

However, as a dark-skinned man living in the color conscious city that looked down on him, life was rarely easy for Santamaria. According to journalist Eugene Holley Jr., the racism in pre-Castro Cuba was so bad that Mongo fled the country for Mexico in 1948 to play with a dance team Pablito and Lilon. In 1950, he made his way to New York City.

“There was plenty of work in those days,” Santamaria once said. “The big bands hired you even though you didn’t speak a word of English. There were so many orchestras, and when they knew you were Cuban, they always invited you to play. Playing with jazz musicians came naturally. Cuba is only 90 miles from the USA, and we listened to American jazz a lot in Cuba. So you have a lot of musicians who’ve dedicated themselves exclusively to playing jazz, and it’s nothing new to us.”

Playing first with Cuban bandleader and the so-called King of Mambo, Perez Prado, he later joined forces with Tito Puente, who was also thought of as a Mambo King. A Spanish Harlem native, Puente’s famed orchestra played regularly at the Palladium on 53rd Street and Broadway; other group members included Willie Bobo, Johnny Pacheco and Ray Barretto.

The club was in the heart of Manhattan and shared a neighborhood with the famed Birdland and forty other clubs. Mongo Santamaria became friends with more than a few of the jazz cats including Dizzy Gillespie, who he’d also work with as a sideman. Mongo was always interested in the link between Afro-Cuban and African- American jazz, and it was during this time that he began experimenting with and connecting those sounds.

Besides being an excellent percussionist, Mongo was also wild showman on stage and in the studio. In pictures and video clips on can see the energy he put into his work as the sweat dripped down his face like a waterfall. As one writer observed, “Something special happens when Mongo Santamaria sits down behind the congas. The man himself is transformed. He approaches the stage quietly, as if listening to some inner cue. He settles in his chair without a word. Perhaps he touches one drum with the palm of his hand, as if greeting an old friend. Then the music begins and Mongo Santamaria smiles. After that, there is no stopping him. Santamaria plays with a sunlit energy.”

In 1958 when Puente signed with RCA Records to record the album Top Percussion, he brought along Santamaria who contributed the songs “Elequana” and “Obaricoso.” That same year, Santamaria also recorded with Cal Tjader on the album Más Ritmo Caliente. Tjader was another vibist who was also one of Tito Puente’s main rivals. Upset by what he viewed as a betrayal, Puente fired Mongo. However, this might’ve been the best thing to happen to Santamaria, who was then forced to become a soloist.

On the cover of his 1959 album simply titled Mongo, he is smiling brightly as though well aware that the album, which contained his composition “Afro-Blue,” would be a hit. According to Raul A. Fernandez, author of From Afro-Cuban Rhythms to Latin Jazz (2006) “The tune would become one of the most recorded numbers of the 1960s and 1970, a standard in the repertoire of all modern jazz musicians.” First recorded for Cal Tjader Sextet – Concert by the Sea, Vol.1 a few months before Santamaria’s solo album, it was John Coltrane’s 1963 cover of “Afro-Blue” that would become a landmark recording.

While there is no evidence that the men were friends, one can imagine that there were times when their worlds overlapped between the Palladium and Birdland, where Trane recorded his version in 1963. It was also in 1963 when Mongo recorded the infectious song “Watermelon Man,” a joyful track written by his then young piano player Herbie Hancock.

In Hancock’s 2015 autobiography Possibilities, the acclaimed composer talked in depth about his early years of playing with Mongo at a Latin dance club in the Bronx. In 1962, having replaced Chick Corea as Mongo’s piano player, Hancock was visited at the club his then-roommate trumpeter Donald Byrd. “During the intermission Donald and Mongo struck up a conversation,” Herbie wrote. “He and Mongo got into this deep conversation about Afro-Cuban music and African American jazz. Mongo told Donald he’d been searching for a link between the two, but he’d never quite found what he was looking for.”

It was at that point that Byrd told Hancock to play his composition “Watermelon Man” for Mongo. Having previously recorded the tune on his solo debut Takin’ Off, Herbie didn’t really understand the connection, but he sat down and played anyway. Mongo joined in as did the bass player. Says Hancock, “Pretty soon the whole band joined in, jamming to this new Latin flavored version of ‘Watermelon Man.’ Within minutes the whole place was jumping, people dancing and shrieking with joy”. After getting Hancock’s permission, Mongo recorded the song which became a Top-ten hit and was also instrumental in setting off the Latin Boogaloo phenomenon that would soon become a prominent sound in New York City during much of the ‘60s and 70s.

According to Guardian writer John Fordham, “That success made an accessible fusion of Cuban rhythms, soul, R&B and funk very popular in the 1960s. Santamaria made 10 albums for Columbia in the style. His eminence as the bandleader who did much to creatively splice Cuban and black American musical ideas, and broaden the technical and imaginative scope of drummers and percussionists, brought him a busy schedule into the 1990s, with late-period albums like Brazilian Sunset (1995) and Mongo Returns (1998) sustaining a remarkable freshness.”

Santamaria went on to become one of the most prolific composers and recording artists of his generation, producing a lengthy catalog of staggering variety and musical depth that was considered the definitive textbook on Afro-Cuban styles. In addition, many future notables have passed through Santamaria’s ranks or collaborated with the conga player including Nat Adderly, Jimmy Cobb, Hubert Laws, and Bob James.

In 1969, Mongo’s souped-up cover of the Temptations’ “Cloud Nine” would be another hit for him. Throughout his career, Mongo would make a lot of covers including James Brown’s “Cold Sweat,” Otis Redding’s “Sitting on the Dock of the Bay,” Booker T and the MG’s “Green Onions” and Sade’s “Smooth Operator.” According to writer Laura Hightower, an essential introduction to anyone wishing to explore the performer’s history can be found in 1972’s Afro Roots, a two-record set that contains tracks recorded between 1958 and 1959. Subsequently, Santamaria focused on the Afro-Cuban tradition for much of the remainder of his career.

Philadelphia DJ and Black music historian Dyana Williams met and got to know Santamaria well back in the 1970s when her then-boyfriend Hubert Laws played flute in his band. “On stage he was explosive, just pure energy,” Williams recalls. “If you didn’t move a groove when he played, something was wrong with you.

In 2018, Williams and creative collaborator Brennan Williams did a presentation at Harvard University on Santamaria as part of the Black Portraiture[s]. According to noted poet, activist and music historian Felipe Luciano, who Williams interviewed, “He (Santamaria) was one of the greatest players of the 20th century. He fused the Congo, Nigeria, Africa with jazz and the indigenous Cuban genres. Mongo’s complex rhythms transposed into American Black music, he popularized the 6/8 rhythm and ‘Afro-Blue’ was the prime manifestation of this It was one of the few times that rhythm became a hit. He opened another window of rhythmic complexity, we took it in naturally. He was quintessentially Black.”

In 1987, Santamaria released Soy Yo, which found him bridging the gap between contemporary black pop and Afro-Cuban music, while 1988’s Soca Me Nice explored the soca, or soul calypso genre. Despite his many successes in the studio, Santamaria favored producing live records, using this type of recording opportunity to advance his multicultural musical agenda.

Some of his most recognized include 1963’s Mongo at the Village Gate, 1981’s Summertime, a live gig with Gillespie and Toots Thielemans, and 1990’s Live at Jazz Alley. One of his last recordings was the 1998 live album Mongo at Montreux. Five years later, on Feburary 1, 2003, Mongo Santamaria died in Miami, Florida, after suffering a stroke, at the age of 85. He is buried in Woodlawn Park Cemetery and Mausoleum (now Caballero Rivero Woodlawn Park North Cemetery and Mausoleum) in Miami, Florida. 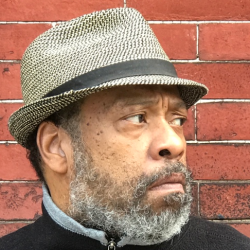 Latest posts by Michael A. Gonzales (see all)