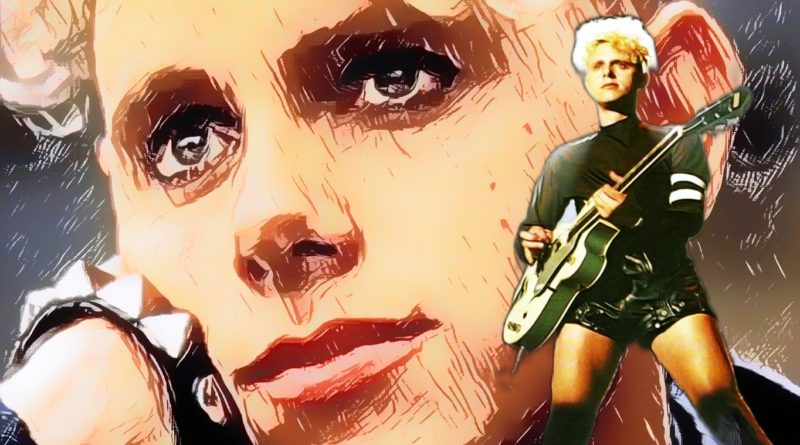 All the bands have had their unique and tangled histories and each have taken various synth swerves with their sound, but consider Depeche Mode’s particular and peculiar trajectory: When they came out of gate in 1981, the songs were written by synthist-sometime singer Vince Clarke who’d penned the insanely catchy, upbeat synth-pop single, “Just Can’t Get Enough” as well as pretty much all the Speak & Spell album.

I’m not saying Depeche Mode were on A Flock of Seagulls path, but, well, maybe.

And, then, that part of it was over. By 1982, Clarke was out of the band to emerge shortly with Alison Moyet in Yaz (aka Yazoo in the U.S.) and then with Andy Bell in Erasure. In Depeche-land, synthist-guitarist Martin Gore – who turns 60 July 23rd – took over the main songwriting duties for the 13 subsequent studio albums. Singer David Gahan joined slightly after Clarke, Gore and Andy Fletcher formed the band. Alan Wilder hooked up in 1981 (and left in 1995).

Gore’s songs worked on pop terms – and over the years Gahan adapted to crowd-pleasing, arena-rock style projection – but they were generally not the happiest of tunes, whether the subject be romance, spirituality, or capitalism. Lust and longing factored in as well. His compositions tended to be lush, albeit melancholic, full of questions. Not, shall we say, perky.

“Depeche Mode is very based around Martin’s songs and he writes very well within a particular pop format,” Wilder told me in 1993.

When Gore and I talked in 1998, the band was prepping for their first tour in four years, featuring their songs from their compilation, The Singles: 1986-1998. (Their latest single “Only When I Lose” was doing a slow climb up the charts.) Which is to say, The Hits – 21 tracks minus “Just Can’t Get Enough” – but Gore assured “we do play a couple of songs that predate that, as well.”

How did the singles differ from the album tracks? Were they written with a different or specific emphasis?

“Not really,” said Gore. “Because I always just sit down and write a collection of songs and then we try and work out which one we feel would do best commercially as a single. I’ve hardly ever written for a single, {an exception being} the new track. It took me a lot longer to write than it usually does. But we’re very happy with it. It’s one of the most soulful things we’ve ever recorded.”

Gore admitted to a bit of unease about taking the show on the road. “You start wondering how rusty you are and the whole thing does seem a bit more nerve-wracking. Believe me, there are things for us to worry about. But it’s fallen together quite nicely.”

As problems go, pre-tour jitters isn’t a bad one. After all, Gahan almost put an end to his life, to say nothing of the band, when he overdosed in Los Angeles in May of 1996. He was arrested, went to rehab, and was in recovery. He would be attending 12-step meetings at every city on the US tour.

Gahan told me this the following year. He found himself awakening out of something — a very deep sleep, perhaps? — and he groggily asked the paramedic next to him the painful, and painfully obvious, question: “Did I overdose again?”

“No, David, you died,” said the paramedic. “You flatlined for a couple of minutes. You were actually dead.”

What was “death” like? Was there a warm and welcoming white light?

No. “All I remember is being really, really scared,” says Gahan, speaking from London. “I can’t even explain how scared I felt and how wrong it felt. I was in this complete blackness and I felt something inside of me . . . I realized this is not what I wanted, death, and it wasn’t the solution and it was for the first {time} — slowly, very very obviously — where I felt I was not going to the right place.”

You can’t bottom out much more than that, although Gahan, then 35, came close the previous summer when he slit his wrist in a suicide attempt. His subsequent heroin and cocaine overdose was the final straw, the epiphany.

“Dave’s never been better,” said Gore, the following year. “He’s very happy, and he’s been clean and sober two years which is . . . well, time really flies. I mean, it doesn’t seem that long ago. He’s fresh and looking forward to the whole process. And me and Andy are trying to learn from our past mistakes and take it a bit easier this time.” Gahan’s fall was, by far, the most public, but Gore says, “We all had our share of problems.”

So, the idea this time was to have fun, play well, and not fuck up?

Gore laughed slightly. “That is the game plan at the moment. The only thing that frightens me, is I think that was our game plan last time. We just can’t let it get as out of control as it was last time. You have a responsibility to those people who’ve gone out and bought the tickets.”

They and set designer Anton Corbijn are welding together the music and machinery for Depeche Mode’s live show. Synchronization was everything. Visuals and staging were key components for a band whose members, except for Gahan, tended to anchor themselves at synthesizers. “A visual aspect is quite important,” said Gore. “I find it very bland to watch bands proving that they can sound roughly like their records.”

The tour was going to be something of a new mode for Depeche Mode. Wilder left the group in 1995 and Peter Gordeno took his spot. Gospel singers Jordan Bailey and Janet Cooke were along once again. But for the first time, the group will employ a drummer Christian Eigner, who, Gore said, boasts that he’s “the second-best drummer in the world.” He would play the entire set. “That immediately gives us a slightly different sound,” says Gore. “I mean he’s very good at reproducing the sounds and triggering the original sounds quite a bit as well, but I think there is a slight twist.”

Which is to say, yes, Depeche Mode, in concert, is a different creature than Depeche Mode, on record. “Sometimes, I feel that our performances are at odds with the records,” said Gore, “but I think everyone who comes to the show knows the records, and the show becomes more a celebration of what the records are about. I don’t think we could really capture the moodiness of the records live. It becomes a totally different ballgame, with people whistling along or whatever. But, at the same time, I’ve always loved our live performances. Eighteen and a half years down the line, we must be doing something right.”

In 1988, this was my take on Depeche Mode in concert: They ranged from stately and somber to sinister and sexy. Gahan is not gay, but rather adept at mining the homoerotic vein, in a manner slightly more subtle than, say, Frankie Goes to Hollywood’s Holly Johnson. Sample song titles: “A Question of Lust” and “Master and Servant.” Sample lyrics: in “Strangelove,” “I give in/To sin/Because I like to practice what I preach”; in “Stripped,” “Let me see you stripped down to the bone.”

There’s carnal pleasure in Depeche Mode’s world — and, of course, there’s rippling synthesizer melodies and rhythms galore — but there’s often the sense that the pleasure is muted. Song titles such as “Black Celebration” and “Shake the Disease” suggest as much. And, Depeche Mode gives you a pretty good clue at the outset: They began the 100-minute concert (behind a scrim and dangling banners) with “Pimpf,” a ferocious, dark, pounding instrumental that sounded gothic and ominous. Melodically speaking, “Blasphemous Rumours” is one of their standouts — a smooth, infectious glide; the lyrics, though, question God’s great plan. “I don’t want to start any blasphemous rumors,” sang Gahan, “But I think that God’s got a sick sense of humor and when I die, I expect to find him laughing.”

“Everything Counts,” the band’s best song, attacks capitalistic greed with a gentle wallop. It’s done not without some irony. “I’ve always said that the music industry is, in fact, one of the most capitalistic industries you can be involved in,” Fletcher told me in 1993. “And each band really is a different brand of cereal in some ways.”

Its chorus — “Grabbing hands/Grab what they can/Everything counts/in large amounts” — was sung by the crowd, after Gahan was too much a cheerleader, leaving the song in their hands and the sentiment in their heads. My only problem there was that the song really is melancholic and serious and Depeche Mode got way too happy with it.

Gore is Depeche Mode’s main sonic architect. As high-tech and electronic as the band has always been, Gore’s approach to writing was an old-fashioned one: Make sure the melody works on a bare-bones level first.

“When I’m songwriting,” said Gore, “I often just start with an acoustic guitar or piano, just to work out the basic chords and words, ’cause I always think it’s important to make sure the basis of the song is strong before you can move onto electronics. You can often fool yourself that you’ve got a great song, when really, you just got a few good sounds happening.”

Depeche Mode, of course, is one of techno’s many godfathers – a Rock and Roll Hall Fame inductee in 2006 (early for a band both English and synth-y) and Gore had mixed feelings about his spawn. “As in all kinds of music, there’s good stuff and a lot of bad stuff,” he said. Last year, Depeche Mode was the recipient of a tribute album from techno artists, where the melodies were largely stripped away in favor of beats. “I didn’t like that particularly,” Gore said.

“We’re more of an inspiration to the techno crowd because of the way we work and the instrumentation we use,” he continued. “We’re one of the earlier electronics pioneers who used computers, synthesizers, and sequencers. But that crowd, they’re not into songs, really.”

There is no Depeche Mode tour this year. There are hints about one in 2022, however. We remain hopeful. Gore’s latest studio work, The Third Chimpanzee EP, is in stores now.