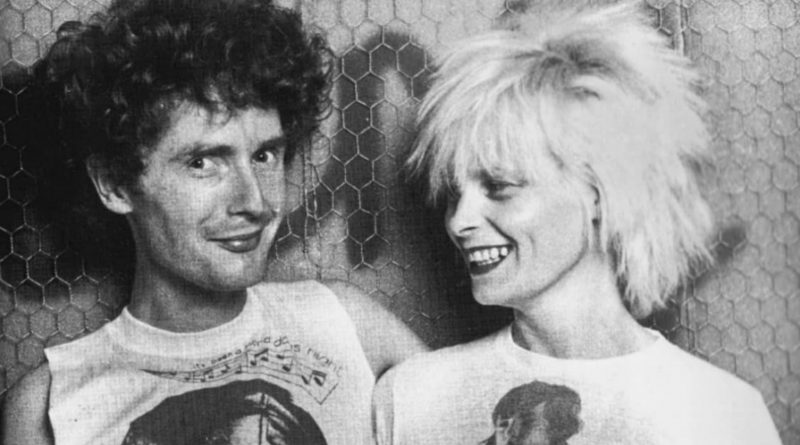 McLaren was best known as the manager of the Sex Pistols, but by the mid 90s, his long entrepreneurial career had started to grind its gears. But what an epic, dramatic and crazy career it was. McLaren was a postmodern bricoleur: everything from a failed coup to take over the management of the New York Dolls, to his brilliant and domineering work with the Sex Pistols, managerial stints with Boy George and Adam Ant, then creating and managing Bow Wow Wow, before finally emerging emerging as a recording artist himself (Fans, Buffalo Gals, etc) and eventually escaping to Hollywood, where he tried and failed to produce and direct movies (he did get a producer credit on Fast Food Nation), and a dizzying assortment of other stuff that never seemed to work out.

In 1985, with my own epic, crazy career was in its infancy, I somehow convinced McLaren him to do a week of interviews with me in New York. But near the end, he realized I was going to write my own book no matter what, and he cut me off. I thought I was sunk, but he had unwittingly given me intellectual capital and introductions, which i I used to spin up a little advance money. So I flew to London, and planted myself at the feet of Vivienne Westwood, McLaren’s his common law wife, mother of his sons, and collaborator for 30 years of what was then seen as rock n roll fashion. Certainly not yet couture.

Vivienne was one of the most difficult people I’ve ever met, then or since. A conversation with her was chockablock with digressions, half-baked ideas, and tangents that often led down emotional paths I was ill-equipped to understand but were always freighted through the idea that to be a punk, anger and fuck you had to be your code.

I was alternately consumed and mocking of her meaningless oppositional stance. Her pseudo-anarchism was a piss in the wind of capitalism. I thought: well, she’s a shopkeeper trying to invent herself as a designer. But looking back I wonder whether all my attempts to remain independent of McLaren’s reality distortion field — his charm and quick wit, creativity, intelligence and accidental business savvy — got in the way of really understanding her role in their relationship or the creative strides she made through the long lineage of stores they opened together, each with their own clothing subculture, at at 430 Kings Road: Let It Rock (Teddy Boy clothes), Too Fast to Live, Too Young to Die (biker clothes), SEX (the iteration that spawned the Sex Pistols), Seditionaries (post-punk duds), and WorldsEnd (pirate gear) —  all this, before the astonishing success of her eponymous couture brand.

No one, least of all a young American writer, could have separated where the clothes began and the music started, who was inspiration, who was execution. They were always grouped together: Malcolm & Vivienne. She was the shmatte maker, he was the puppet master of the punk gesamtkunstwerk; my job was to write a book about him. I gave her credit for being the executor of the long 430 Kings Road journey, but in retrospect I subsumed her fierce politics, hardscrabble work ethic, and creative genius with clothes to being a sideshow in McLaren’s narrative. In my telling, she was in McLaren’s orbit. But in truth his story went in circles after he left the UK for New York and Hollywood, while hers turned into a brand truly committed, politically and environmentally, to sustainable fashion, right until the moment of her death this week in London at 81.

Indeed, unlike McLaren, whose naughty antics and epaters les bourgeois rose (descended?) at best to stealing other people’s work and treating his collaborators like shit, Westwood’s stroppy anger became more purposive over time. She found her métier in an uneasy alliance between activism and fashion. whereas Whereas McLaren’s mark dimmed since after the Sex Pistols, no matter how hard he tried.

This is not a mea culpa. Vivienne knew very well (more than me) that cooperating with a yankee journo was a hostile act. One day she accompanied me to Liverpool to meet the Sex Pistols graphic designer Jamie Reid, a sodden, solipsistic artist she hadn’t seen in the decade since the Sex Pistols’ demise. We met Reid at a pub somewhere near the Liverpool train station, where he drank himself into an angry stupor, until she finally had enough, grabbed me by the collar, and pushed us into a taxi back to London, Reid calling out in the background, “you You and fucking Malcolm will always be fine, but look at me.”

I didn’t realize that this was a healthy declaration of independence, and e. Even though I never gave her the credit she deserved, maybe even wrote the wrong book, the book that would have looked at the joint roots of their expressions of mischief-making and anger — the ripping and tarnished stance of punk — I watched her career blossom with something like pride. You’ll read a lot of obits this week proclaiming her the queen of British fashion; and it gave me great pleasure that one of the authors of punk — “God save the queen, the fascist regime who made you a moron, a potential H bomb” — was eventually made a Dame and became an great fan of Prince Charles.

RIP, Vivienne. You were a bit batty to be sure, but a punk till the end. Craig Bromberg
Craig Bromberg is the author of The Wicked Ways of Malcolm McLaren (HarperCollins, 1989) and is the founder & CEO of and Homesy, a social network for real estate.

Craig Bromberg is the author of The Wicked Ways of Malcolm McLaren (HarperCollins, 1989) and is the founder & CEO of and Homesy, a social network for real estate.