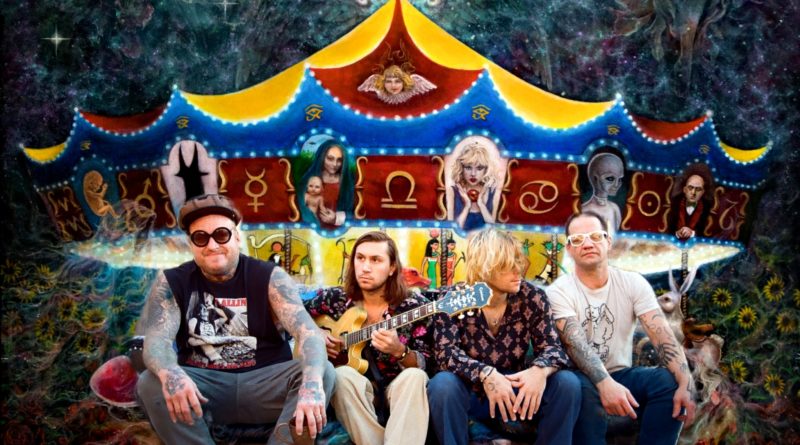 A bicoastal supergroup of sorts, the band is comprised of the crack songwriting team of vocalist/guitarist Daniel Lonner and guitarist/vocalist Eric Sherman, both previously in Late Night Episode, and the powerhouse rhythm section of drummer Wade Youman from Unwritten Law and bassist Eric Wilson from Sublime.

Additionally, they received keyboard and horn arrangement assistance from No Doubt’s Gabrial McNair.

Elements of solo Mark Lanegan, Purple-era STP and the Butthole Surfers at their most melodic can be heard across the span of these 25 songs. As a matter of fact, the sessions were actually recorded at the legendary Texas studio Sonic Ranch with Surfers guitarist Paul Leary and Stu Brooks, bassist for the invincible Dub Trio.

And Rock & Roll Globe is happy to premiere a key track off the Spray Allen opus in “Illuminate Me.”

“‘Illuminate Me’ was recorded during a lightning storm,” Lonner tells us. “Bats were flying around the live room in the studio Paul Leary was conducting and the ancient spirits were speaking, ‘Stay Alive.'”

About the experience of making this album with his longtime collaborator and a bunch of really experienced innovators in the music world, Lonner explains: “I love great music. I love the way music makes you feel. I love the adventure that ‘following the music’ can take you on; it’s relentless. I appreciate not just the sound of good music but how it gets made. Now i want to be in a legendary band. The cast of people that went into making albums for Zeppelin, Hendrix, the Velvet Underground, the Stones, Joni Mitchell, the Byrds; that’s the company I want to be in. Every person from the drummer to the assistant engineer makes that what it is. That power struggle of everyone trying to get their best into the recording is what I love. You don’t really get that in modern pop music right now.”

Listen to “Illuminate Me” below.