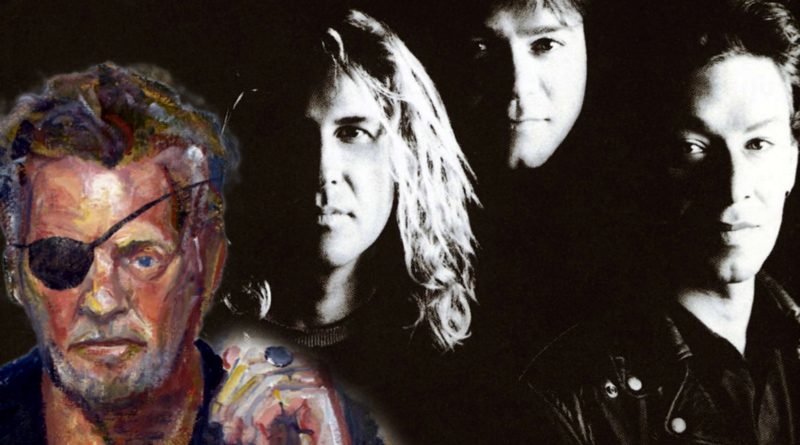 Hurray! People who really, really really care about college football will be so excited! Curiously, one of these three recordings is a fairly exact cover of Van Halen’s “Finish What Ya Started.” True, Mr. Springsteen is well known for his often unexpected covers, but this one still took many of us by surprise.

Probably the most astonishing thing about the Springsteen/Mellencamp version of “Finish What Ya Started” is that they changed the lyrics around a bit, gave it a different name — “Did You Say Such A Thing” — AND THEY ARE CLAIMING THAT IT’S A DIFFERENT SONG ENTIRELY, one that John wrote all by his little own self!” But our ears know the truth. Right now, I want you to listen to both, or a little of both, anyway. Then we shall continue with this article. I’ll wait here and think about Hawkwind and/or Chogyam Trungpa. That’s my safe place.

Now, how about that.

“Did You Say Such a Thing” is unreservedly, unapologetically, and unmistakably a COMPLETE and utter rip-off of Van Halen’s “Finish What Ya Started.” This is unaraguable, and by unarguable, I mean inarguable. I mean, this is one of those “Oh WHAT the factual uncle, COME ON, they’re not SERIOUS, are they?!? SHUT THE DOOR HENRY, this HAS to be a joke, right?!?”

But it’s not a joke. This is actually happening. One of these guys is a billionaire (or damn close to it). The other one is, well, whatever Mellencamp is (a halfway decent painter, and I mean that sincerely). Yet we are supposed to believe that somehow neither of ‘em noticed that they had written and recorded a song that had already been written and recorded by someone else?

This is the worst case of this sort of mishegas I’ve heard in a long time, and at the hands of two such iconic and well-toned senior superstars, too. I mean, listen to the thing. PAUSE FOR WELL-MERITED SPIT TAKE. And I mean a good, old fashioned, Danny Thomas-style spit take (a reference Springsteen and Mellencamp are old enough to enjoy, though probably not many of y’all). Ronnie (by which I mean Ron Hart, ladies an’ gentleman, my fine and tolerant editor), can you stick a video in here of Danny Thomas doing a spit take? And while we’re at it, can we give a shout out for Hans Conried as Uncle Tonoose? I know that’s not actually remotely relevant here, but see, it is going to take a LOT of cultural-reference palate clearing to make me get past the sheer horror of this bit of BossyMellen artistic thievery.

So, HOW DOES SUCH AN OUTRAGEOUS THING HAPPEN, this veritable and total defenestration of all standards of geometry, theology, and copyright?

Imagine you are a rock star. Surely you have. Imagine you are a billionaire rock star. You are so powerful, and inspire such an utter, complete and Sun King-like awe amongst your minions, that when you record a song that sounds exactly like someone else’s song, not one single soul dares to tell you.

THAT is how this happened.

Not ONE of the dozens and dozens of people in the long chain of production and release of “Did You Say Such a Thing” DARED tell these ROCK STARS, these veritable KAISERS of the working man, these KHANS in Doc Martens, that they had made a carbon copy of someone else’s song. Everyone was so afraid of them, so awed by their god-like presence, that even when they recorded something that is an utter replicable of someone else’s song, no one said boo.

The Great Kubla BossyCougar made something that anyone with ears (and some vague cognizance of 1980s musical culture) knows sounds exactly like someone else’s song. Yet people were so struck down by awe and fear of Mister Man of the People Billionaire and his Pal Johnny Smalltown that not ONE freaking soul involved in the entire process of making the record said BOO. That’s how this happened. And there were a lot of people in that chain: the musicians, the drum tech, guitar roadie, studio engineer, studio engineer’s assistant, studio soda machine re-stocker, wife and/or girlfriend and/or pal of the Superstar and Strummy Cougarman, mastering engineer, guy who makes coffee for the mastering engineer, guy who valets mastering engineer’s car and listened to the CD he left in his disc player, any number of folks at the record label…there are literally HUNDREDS of people who heard this song before it reached the world. Yet apparently not ONE soul meekly raised an elbow off of the table, waved a pinky finger and said,

“Oh sirs, Oh Mister Man and the other guy, by the way, sirs, and I mean this kindly because I loveylovelove your work, and I saw you on Broadway fourteen times, and you, the other one, I think I saw you at Farm Aid once – I think that was you, right? — but sirs — and I say this with no disrespect — THAT SONG YOU’VE JUST MADE SOUNDS SO MUCH LIKE SOMEONE ELSE’S FAMOUS SONG THAT I LITERALLY AM LAUGHING SO HARD THAT I FARTED A LITTLE, sirs. And I say that with all due respect, sirs. Let me ask you, kindly, sirs: Are you sure, sirs, are you really certain you want release something that sounds so much like another famous song that it will leave people shaking their heads from Maine to Monterey, from Cape Cod to Catalina Island? And secondly, sirs, do you really want to put something out that will have those Van Halen lawyers so eager to litigate that there will be a pile-up of Priuses from Calabasas to Altadena, sirs? Do you really want that, sirs? And oh, sirs, and I direct this, respectfully, to the famous one, did I mention that I lined up at Barnes & Noble for four days to stand next to a cardboard cut-out of you, sir, which I was later told was actually you. So I say this with all due respect.”

These days we are hearing a lot about musicians standing up for what they believe in. Hurrah and huzzah for that, we stand together and strong like bull! (This is an Uncle Tonoose reference, sorry, couldn’t let that whole thread go.) That is seriously a good thing, and there can never be too much of that. But while we are at it, friends, let’s stand up for this, too: No rock star should ever be so powerful and inspire such fear and awe in people that NO ONE will tell him/her/they that they’ve recorded a song that sounds exactly like someone else’s song.

Listen, I am fortunate enough to have had some experience making some records, as a producer, musician, and record executive. It truly is a gift to have had that privilege. On literally every project I have worked on, at some point in the recording process we heard a song and someone went, “Huh, y’know, pallie, that sounds a lot like someone else’s song.” And then we either altered the song or just tossed it. This happened every project; we actually threw four songs off of a Scott Weiland record I worked on. That’s the way this thing is supposed to work. Your friends and associates are supposed to keep you from getting sued and/or looking like a thieving idiot. But somehow, Mellencamp and Springsteen either did not allow anyone to dare critique their work, or they chose not to listen when they did.

So I say these words, which apparently no manager, lawyer, tape op, mandolin player, or mandolin-string changer had the guts to say:

Dear John Mellencamp and Bruce Springsteen: You just released a song that is a complete and total rip-off of someone else’s song. Somehow, everyone – and I do mean everyone, from ashtray cleaner to bass player to under assistant West Coast promotion man – was too afraid to tell you.

There is something so corrupt in your organization, or your way of doing business, that no one stopped you from releasing this atrocity. But you need to know, you really need to know, and need to own this.

I dedicate this to the great Bob Giordano, a Springsteen fan from way, way back and a great friend, who pointed this issue out to me.

Tags: Bruce Springsteen, Did You Say Such a Thing, John Mellencamp, Van Halen

82 thoughts on “Dear Bruce Springtseen and John Mellencamp: What the Actual Eff Were You Thinking?”